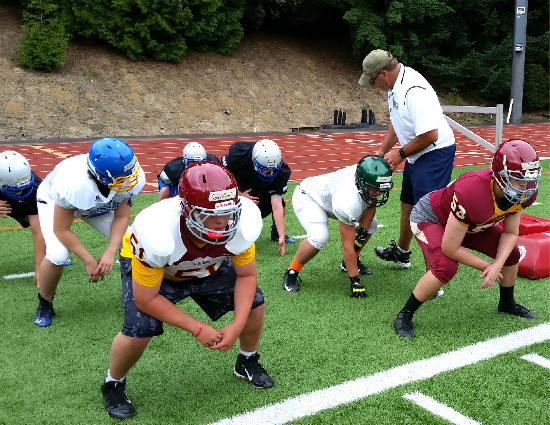 Portland, OR—Beginning from it’s humble roots in Portland, OR in 2011, Trench Camp, the high school football camp exclusively for offensive and defensive linemen, is now

“It’s hard to believe this will be our 5 th camp,” said Stan Brock, 16-year NFL veteran and the creator of this unique venue that uses former NFL linemen to teach the

“Our first year we had about 60-kids,” Brock goes on to say “now we have camps in Portland and Seattle with over 100 players in each camp. It’s hard to believe we’ve

grown so much, so fast.”

Brock felt compelled to put Trench Camp together when he looked at the football landscape and saw there were few—if any—camps that focused on linemen. And he

realized that there were no line camps using former NFL players to coach, so he started recruiting a group of his former NFL buddies to come coach the camp.

Brock adds that there is also talk of expanding the camp to the East Coast next summer.

“We keep getting calls from parents and coaches back east that want to see us out there, so that’s something we’re going to explore soon.”

So what has been the secret to making Trench Camp one of the “must attend” events in the NW?

“We teach the basics at this camp, really starting from scratch and making sure the kids have a solid foundation for playing both the offensive and defensive line. Believe it or

not, in this day and age, many of these kids are never taught some of the most basic lessons of line play.” Brock went on to say. “Oh, and having coaches like Steve Emtman, Gary Zimmerman, Manu Tuiasosopo, Kevin Gogan and Guy McIntyre in the past hasn’t hurt either.” Brock says with a grin.

This year, the Portland camp takes place at Lewis &  Clark College July 8-10 and the Seattle camp will once again be at Arlington High School in Arlington, WA.

For more information, go to www.trenchcamp.com

Editor’s Note:  This is a one of a kind camp for athletes to learn.  Any player or coach who wants to go and learn from the greatest technicians and athletes to ever play the game should go and take advantage of this Camp.  This is one of the few camps we have ever given a 5 Star rating to- that is how good this event is.  We plan to visit the camps if at all possible.