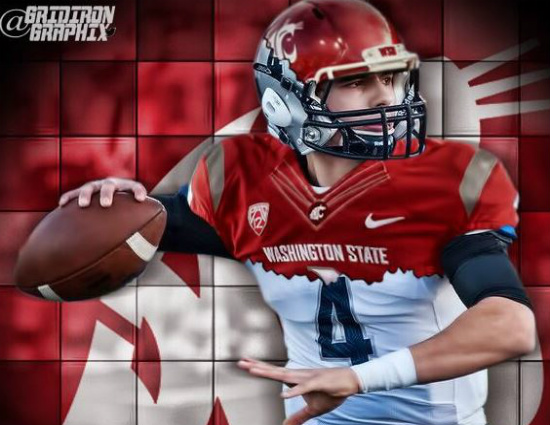 Northwest Prep Report just launched our Top 24 2017 NW Recruit List this week and thousands of you liked and viewed our it.  On that list were Connor Neville (6’2″- 190 lbs Pro Style QB from Wilsonville HS ) and Dontae Powell (6’6″- 300 lbs O-linemen from Richland, HS) who both made big news yesterday as they committed to the Washington State Cougars.

WSU was hosting their Spring Junior day yesterday and it seemed like most of the top high school football prospects in the Region were out in Pullman, Washington to see what the Cougs had to offer.  The weather was perfect and the result could not have been better for the Cougars as they landed verbal commitments from Neville and Powell who are both highly Nationally rated prospects.  These are kids that any school in the Nation would be happy to land.

For Powell he will stay on the East side of the Cascades and play a few short hours from his home in the Tri-Cities Washington.  In the WSU pass happy attack this gives Dontae a chance to develop into an NFL offensive linemen with Pass Blocking skills to match his all ready road grader like run blocking ability.  He will no doubt be looked to for early play and will be a leader on the offensive line for years to come; something any football team has to have to succeed at any level.

Neville is one of the top rated Pro-Style passers in the Nation and that is exactly what Coach Mike Leach’s Air Raid offense needs.  What quarterback would not want to be looked to by this offense to throw 4 out of 5 plays and spray the ball all over the field?  Connor has the ability to throw every route in the playbook and scramble when he needs to and his quick release and ability to read defenses will be big assets as he progresses through his college years at WSU.

I would like to thank all the coaches who believed in me. But I choose WSU! #GOCOUGS #COMMIT pic.twitter.com/oIBAfbla3s

A lot more went on up in Pullman with Twiiter and Facebook heating up with reports of offers being close and other top recruits posting their love for the Cougs and the great day they had.  One of them is 2018 Top Oregon recruit Braden Lenzy who landed an offer from the Cougs proving his Pac 12 potential.  He is one of the fastest and best all around athletes on the West Coast in the class of 2018 and hails from Oregon’s Tigard High School where he is a stand out athlete and student.

WSU set a high bar for the rest of the Pac 12 but no doubt as more Junior days unfold more and more news will be coming in of offers and commits.  This was a week that Coug fans may remember for years and years to come!

Best wishes to all the recruits of the NW and the colleges recruiting them this Spring.  NWPR will keep you all updated.